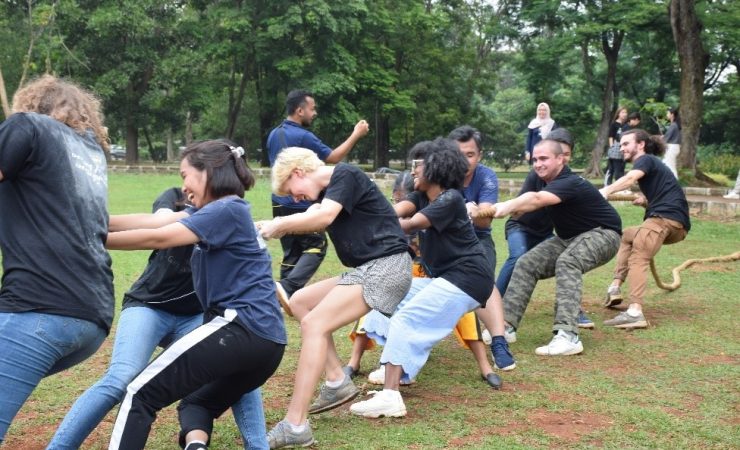 In January, Universitas Indonesia welcomed a new batch of international students for the even semester of 2020. This welcoming week event started from January 12-14 with Airport Transfer, picking up students from the CGK Soekarno-Hatta Airport. Following the next day (January 15) was the University Registration and Library Tour. On this day, Buddies from UI Buddy Club helped their international students to be registered in UI’s academic system and to make student cards. There were also SIAK-NG Simulation to help students getting more familiarized with UI’s important websites and how to use them. The last session for the day was the library tour and simulation with the help of UI Library.

Following the event, Universitas Indonesia held an Orientation Day for the international students. The event started with registration and safety video presentation. Orientation Day was officially opened by MC, a traditional performance from Liga Tari Universitas Indonesia, and a welcome remark from the Head of International Office (IO) UI. Afterwards, there was a presentation about Indonesia and UI from IO UI, followed by presentations about academic regulations in UI from five faculties (FIB, FT, FH, FISIP, FEB). Right after an ice breaking session, there was a presentation about UI facilities by Directorate of Student Affairs UI and student clubs (basketball and karawitan units). After lunch break, there were information session about health facility in UI and adapting in Indonesian culture and environment by Makara Satellite Clinic, presentation about Emergency and Safety Plans by OHSE Unit UI, game sessopn, immigration information session by Depok Immigration Office, and presentation from UI Buddy Club and buddy introduction by the Board of Directors of UI Buddy Club. The event ended with a photo session and campus tour.

To refresh students’ mind after two days full with important informations, UI Buddy Club held International Students Gathering Day on January 18, 2020, at Taman Firdaus UI. The event was aimed to introduce international students to various Indonesian traditional games, such as balap karung (getting inside a cement sack and hopping along to the finish line), estafet bedak (trying to move a bowl full of powder without the content pouring out of the bowl), joget balon (two people moving one balloon between them together), estafet kelereng (moving a marble using only a spoon without the marble falling down), and trying to get a pencil—tied behind with a rope around the waist—inside a bottle. International students were grouped into six groups, each group named with a tourism area in Indonesia (Way Kambas, Rinjani, Bunaken, Ijen, Labuan Bajo, and Raja Ampat) to get students to know more about Indonesia. The whole game concluded with a tarik tambang game, in which students were separated into two sides and trying to pull a tambang rope as hard as they can to win. International Students Gathering Day was closed with winner announcement and a photo session.

On the next week, starting from January 20-24, there were faculty registrations held by FIB, FT, FH, FISIP, and FEB in each respective faculty buildings. International students went to register courses they want to take during their study in UI, accompanied by their buddies.